Come and play against other players, show the world that you deserve to be a winner and collect Ethereum/TRON (TRX) Prizes.

About "TORPEDO LAUNCH":
You are in command on a WW2 Class Submarine, YOUR MISSION : Seek and Destroy enemy ships.

How to Play:
Buy a batch of 15 torpedoes and try to score as much as possible by sinking ships and submarines.

At every play, the best score is registered also for the HIGHSCORE JACKPOT PAYOUT which is paid every 100 play.

In addition, every time you buy new torpedoes, 5% of the price will buy you HDX20 Token you can resell anytime, earning you Ethereum (or TRON TRX) from the volume of any HDX20 POWERED GAMES as long as you hold them (visit https://hdx20.io or https://trx.hdx20.io for details).

We wish you Good Luck! 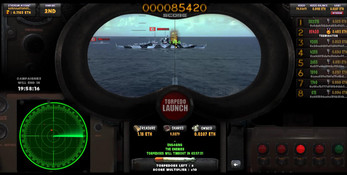